I’m asking for your help again as you guys really delivered last time with my request for cognates and false friends. Reminder, this is for my podcast “The Future is Bilingual”.

For February, I’d like to publish an epsiode about terms of endearment in different languages. For example, in English we use words like honey, babe, pumpkin when talking to people we love (e.g. significant others but also young children). I’d love to hear what words are popular in the languages you speak and what they mean in English. For example, in French you can call someone “mon chou” (my cabbage).

I hope that’s clear. Let me know if you have any questions. Wishing you all a wonderful new year! Une bonne année ! Szczęśliwego Nowego Roku! ¡Prospero Año Nuevo!

Hope you are well!

We have a very unique way of showing love in the Arab world. Although literally, words/expressions of endearment might sound negative and oftentimes unacceptable, Arabic speakers have no negative perception of such words at all. On the contrary, we actually adore hearing such words.

Zeina, thank you for sharing! That is really fascinating. We say “apple of my eye” in English which is kind of weird

I appreciate you separating these out into 3 groups for me. I love a good organized list

Polish is full of them and they are used a lot.

In Polish you can also play a lot with these words creating different diminutives - żabko, żabeczko, żabeńko.

Dziękuję serdecznie! This list is amazing and I use some but not all with my kids and husband. I love how rich Polish is with this topic (and many others) and the seemingly endless possibilities of dimunitives.

The list is inexhaustive, another one is serduszko (little heart). Another thing that I noticed is that I also use them at work. I live and work in the Netherlands, but there are two other Polish guys I regularly work with. One is based in our office and the other one is a sales guy based in Poland. I noticed that I use them when I know they are kind of down and then I say this kind of words to cheer them up, to make them laugh. One of the guys addresses me with Tomaszku from time to time when he wants me to solve a problem for him or get some information quickly and he knows he’s annoying, because he sometimes calls me 20 times a day with different questions.

When I used to work in the office in Poland, we also used misie, misie pysie when we talked to each other. But not to everyone. Only the closest colleagues on the same level within the company. I think it all depends on the relationship you want to build with people around you.

Few years ago I used to work and live in the UK, there were around 30-40 people in the office. It felt really great. We were like a small family. It was very normal to say, thanks, (my) love, thanks, pal, cheers honey/hun/hunnie.

When I do it in the Netherlands, people start blushing, don’t know how to react and seem to be very confused. They are not that much used to saying thank you. They rather take everything for granted. They keep a lot of distance, are not interested in making friends. There are not many Dutch people who are interested in other cultures and open for them.

On the other hand when I used to work with Belgians, I used to call 2 of my closest colleagues tante C and nonkel Y (auntie C - her name is Caroline and uncle Y - his name is Yves). I’m still in touch with them and from time to time I carry on calling them using these nicknames and we have a good laugh. Belgians also speak Dutch, but the way they use the language is completely different from the Dutchies.

To me it looks like it all depends on the environment you grew up in and what you were exposed to over the years.

I was exposed to many cultures, many languages and I’ve lived so far in 5 different countries. I’ve become a mix of different cultures over time.

In Mexico, we use some good ones, and some funny words. We’ll say
Mi amor
Mi vida
Corazon
Querida
Bebe (I think this came from English, I haven’t heard it in use until recently, maybe someone else can talk about this)
Mi vieja (when she is referred to in third person, used in conversation)

¡Gracias Miguel por estos ejemplos! Is “mi vieja” used in a positive way? I know some languages use similar language, but it often carries a negative connotation.

Hi all, last chance to represent your language(s) and hear your examples on a podcast!

Here’s the link to do that : https://anchor.fm/the-future-is-bilingual/message

FYI We hope to record sometime next week. Thank you again to everyone who contributed

I like the Romanian term: draga mea
That means my dear in English

Hi,
I don’t know if it’s too late. I’d like to mention the German ones because I think we have quite a few weird ones.
So, a lot of people like to go for animals:
Hasi, Häschen (bunny)
Mausi, Mäuschen (mouse)
Bärchen (bear)
These would be mostly used for partners.
When referring to children, we like to combine two animals:
Mausebär (mouse bear) is a country-wide favorite. (I actually use this one quite a bit).
For both adults and kids the animal can also be added to the name. Often it’s Maus. So, I would be Mirimaus, for example.
For kids we also have things like:
Räuber (robber)
Räubermännchen (little robber man)

Ok, here come the weird ones. For some reason, references to smelly things are also popular, although it may differ regionally. In my family, Stinktier (skunk, literally stink(ing) animal) has always been a favorite. It can be used for adults or kids. Maybe people came up with it while changing diapers. I’m not sure.
But there is another one. At least in my city, Cologne, “Futzemann” is a perfectly normal term for small children. It literally means fart man. However, it can be used for any gender and basically refers to a person that is still little enough to be allowed to fart in public, I guess. This one is quite regional, but overwhelmingly popular in the region. It’s used by almost everyone. You can even get merchandise with the name. 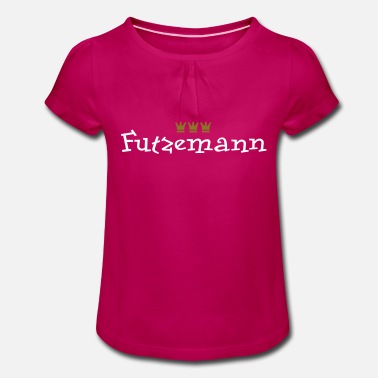 This one is also sometimes combined with some of the other terms of endearment and becomes Futzebär, Futzeräuber, Futzemaus etc.
I use some of these quite often with my son, but we don’t usually think about the literal meaning while using the term.

I hope any of this helps you with your podcast. Good luck.

Danke Miriam! It’s not too late and we’ll definitely mention these as they are awesome! I really like that you combine two animals into one name. I wonder if other languages do that too? We also say things like “you little stinker” in English, but usually when we’re pretending to be mad. Thanks again for the great examples!

In Spanish people will sometimes say “mi amor”(my love) to their children. I’m not sure how common this actually is as I don’t live in a Hispanic family. I do believe this is true though because it is quite common from what I hear from my friends and from tv. I think this makes sense for the question you are asking and I hope it helps.

Yes, you’re right. It is very common to say amor to children. Cariño can also be used with kids. They’re not necessarily romantic terms.

Good question! Often when I hear it, it’s simply used to refer to someone’s wife, or I could use it to refer to my wife. Close friends use it among each other. Me personally, I wouldn’t use it with someone that I don’t know, only with friends. I think that depending on age, it could be offensive, most especially with a stranger, which is one reason why I would only say it with friends. I know other people who use this with anyone’s spouse. Haha

Danke Jolien! What do these terms translate to in English? I don’t speak Dutch or German.

Hahaha, the English translation of my German and Dutch words is: Terms or words of endearment!