Hi everyone! My name is Joe. Both my parents are from Poland, and I was born and raised in Metro Detroit. My family was very involved in the Polish community, which is the second largest in the US. We went to a Polish church, I did Polish dancing, and I went to Polish school on Saturdays (we actually crossed the border every week and went to the Polish school in Windsor, Canada because my day thought it was better there lol). I started learning Spanish in 6th grade, and I spent a year in Salamanca, Spain, and two and half years in Mexico, so I would say that Spanish is my strongest foreign language. I spent 2 years in Bad Münstereifel, Germany (near Bonn) where I learned German. I also spent a year in Cracow, Poland. After spending 4 years straight in Europe, I came back to the US, and I learned French, Italian, and Portuguese on my own. In college I spent a semester in Austria in the beautiful town of Gaming, which is southwest of Vienna. Right now I’m learning Russian. For 4 years now I’ve been the organizer of a polyglot group that meets every Saturday, and we speak 5 languages for half an hour each: Spanish, French, German, Italian, and Portuguese.
This is my very first time attending a polyglot conference, and I’m so excited that I almost feel manic lol. It’s so cool

Hallo Melanie, es freut mich auch, Dich kennenzulernen! Yes, we would normally meet in Novi and Ann Arbor, but because of Covid we’ve been doing our meetups on Zoom. We’re actually meeting up tomorrow at 3pm. If you’re interested, you can message me your email, and I can forward you the info. 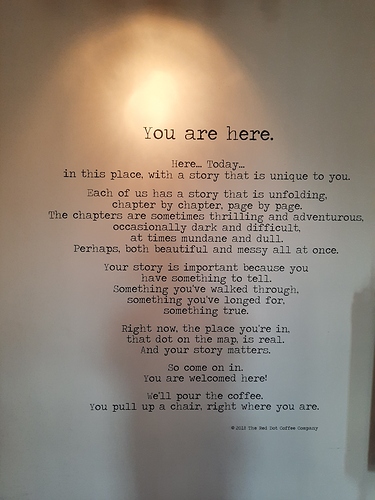 It’s been so uplifting and inspiring to read about everyone’s stories, as well as having the opportunity to share my story. Here’s a quote that I really like from a coffeshop here in Northville, Michigan called The Red Dot.

I understood every word! Awesome job

There are others who don’t speak well either - if at all… But I understand if you decided to join another time!

I’ll be running a Polish session on Saturday at 7 pm London time. Details will be available in the programme tomorrow. Come along if you happen to be free.