I stumbled upon a website that does simultaneous translation into multiple languages.
https://nicetranslator.com/ 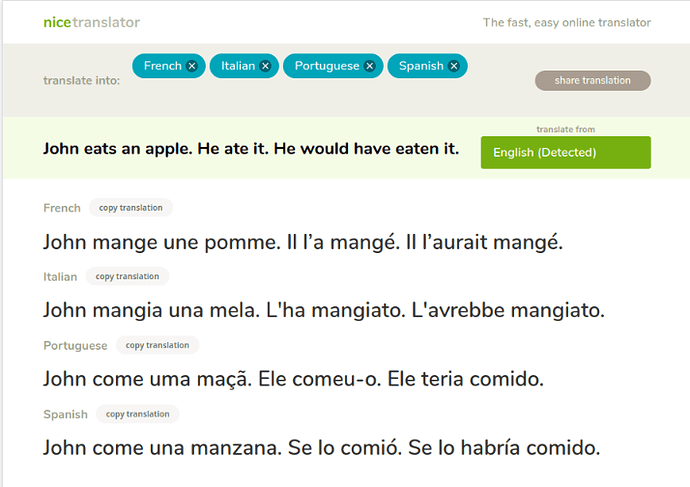 This looks like an interesting site. I’ll give it a look. Thank you for sharing.
Edit: I have looked at it and I’m very impressed. I will play with it more as time goes on.

“Nice” tool. Like to explore this further. Thanks for sharing here.

Fantastic. Thanks.
I just tried the sentence “I don’t know if I’m ready” in Turkish in Google Translator last week as I wasn’t sure about the correct construction of the if clause, which seems easy but I think is a bit tricky in Turkish, and when I discussed it with my Turkish exchange partner this week, she said that the way Google constructed it wasn’t wrong (using the question suffix, “Hazır mıyım bilmiyorum”), but it’s not how people usually say it.
And this translator now got it right (using a relative suffix and using the verb twice “Hazır olup olmadığımı bilmiyorum”). So, given that DeepL, my favorite translation tool so far, doesn’t have Turkish and Google is not great, this is now not only the first multilingual translator I know but also the only Turkish translator that’s actually useful.

Thank you for sharing this, I’ll have to try it out as I’m not too happy with Google either, esp. with non European languages